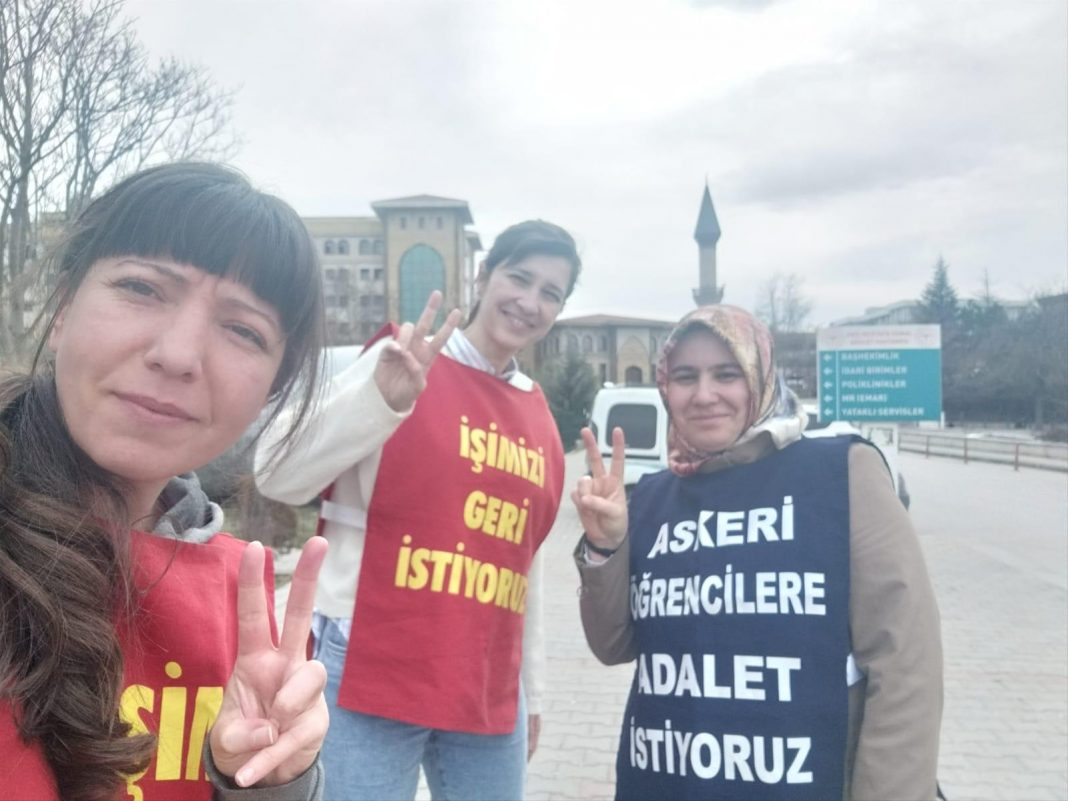 Now we’re going to repeat it in public. Nazan and I are going into action. We continue to fight for both the cancellation of the decrees and the abolition of the lawlessness applied to the cadets.

Nazan : We want our jobs back!

Melek : Have you heard that 19-year-old cadets are being sentenced to life? Three of these are female cadets. We won’t feed you our three daisies. You will release three female cadets. You will accept martyrdom of Murat and Ragip.

They’ll throw you out of our religion. Who doesn’t have the guts is coming here and attacking the worker in the apron. Am I the one who killed the soldiers? We want our jobs back.

We did the same act with mother Melek. They detained mother Melek. Because they have problems with mother Melek. Miserable cadets went to the bridge. 19 20-year-old cadets. Did they stage the coup? Their commander comes one day and says to the cadets, “We’re going to the bridge. There’s a military practice.’ Do the cadets have the luxury of disobeying orders? Can they say, “No, I’m not going”? They did, they’re gone. They didn’t know what would happen to them. The ungodly people who call those kids “coup plotter” is not ashamed. When those kids crossed the bridge, they paid for the bridge crossing. Would the coup plotter pay for the bridge? 19 20-year-old kids. They don’t know anything. They were sentenced to life in prison. You know why? Because Tayyip Erdogan wrote a letter to the court and said, “I’m complainant” Who was smiling at the airport the night of the coup? Was it us? Who said, “The coup is a blessing of God”? Was it us? Open your mouth and say the words to Tayyip Erdogan, you say to this person who wants her job, can you? We’re not the ones who escaped, but the AKP! Whoever flees from judgment, whoever fears from court, is guilty. Whoever’s running from court is guilty. Tayyip Erdogan is on the run, AKP is on the run.

Cameraman : 6 pm announcement of Nazan Bozkurt. She was going out with Melek Çetinkaya to explain. They kidnapped Melek Cetinkaya. As Nazan Bozkurt continued to explain, they took Nazan and dragged her here.

Nazan : What they’re doing is so illegal, it doesn’t fit in anything. If you’re accepting this as illegal action, we’ve been up there two. We went out with two, detained one by the police. They took one away. So how is it illegal? Two people go out there to say the same thing. One doing an illegal demonstration, the other one doing what? We are really tired of AKP, the oppression of the AKP. But we are not tired of fighting with AKP, we will not be tired. All the way. They broke our bones; here we are again. They plucked our hair, we’re here again to say, “We want our jobs back!” They poured gas into our mouths, and here we are. They harassed women; we came again. They cursed our mother, our dearest, we came again. What did Melek Cetinkaya do? We asked there, and we asked here. What did Melek Cetinkaya do? They teared her heart out, and they sentenced her 19-year-old to life in prison. She says, “I handed my son over to you at the age of 13, the state, military high school. You mean him a terrorist? You did it, then. I sent him to the state when he was 13.” She is suffering great hardship. Is that so hard to understand? What do we say here, “We want justice”? Who’s offended by “we want justice”? Only those who have done the injustice will be offended by the sentence “we want justice”.

Whoever is doing injustice, who compels the courts, is also disturbed by the phrase “we want justice”.