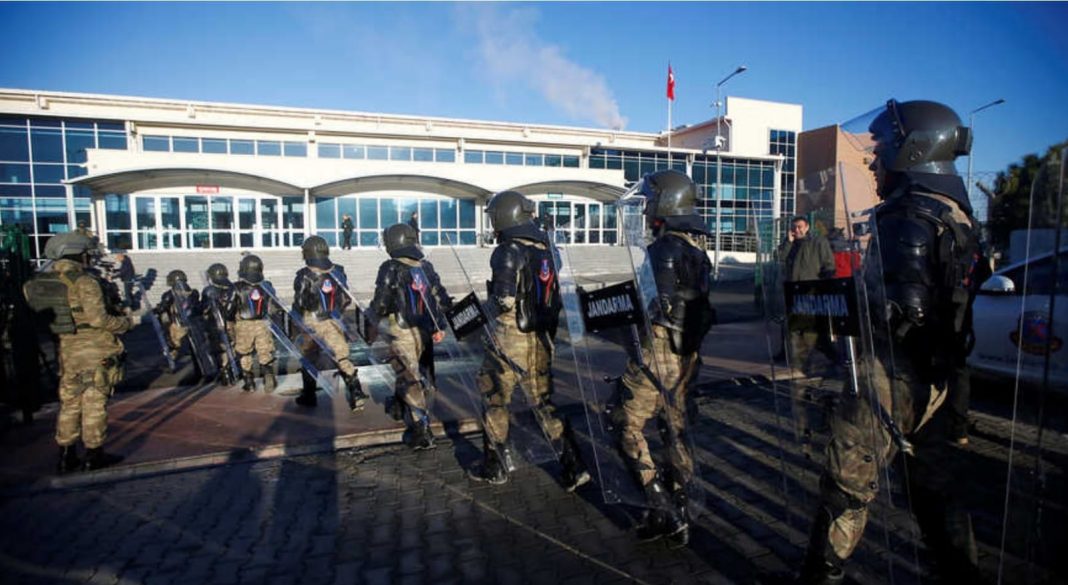 Leyla Simsek Rathke was acquitted of terror-related charges in September, but she continues to struggle to regain basic rights such as the freedom to travel, work and access social services.

Simsek Rathke, a former academic at Marmara University in Istanbul, was dismissed under a state of emergency in February 2017 in mass purges that saw more than 130,000 civil servants lose their positions following a 2016 coup attempt in Turkey.

Frustrated by the inability to get her job back or obtain a valid passport, Simsek Rathke joined a group of purged civil servants in the Kadikoy district of Istanbul Sunday to protest the ongoing restrictions on dismissed workers. Though the post-coup state of emergency ended in 2018, many of those accused of collaborating with terror groups on dubious evidence continue to find justice evasive in appeals courts. Throughout the process, they have remained ostracized from broader Turkish society, which they feel has cast them as criminals.

In recent months, the dismissed civil servants have ramped up efforts to draw attention to their dire situation.

“For three years now, I have been jailed in this country,” Simsek Rathke told Al-Monitor, referring to her travel restriction. “I got a job offer to teach at the University of Kassel [in Germany] and I couldn’t leave. … I didn’t want to try the illegal way. Some of our friends did that, but I didn’t want to escape like that because I am not a criminal.”

Simsek Rathke was one of the more than 1,000 Academics for Peace who signed a declaration denouncing conflict in southeast Turkey in 2016. Since then, the vast majority of signatories have lost their positions and remain unemployed despite a Constitutional Court ruling in July 2019 that found the academics’ rights had been violated.

Yet academics make up only a portion of the purged civil servants in Turkey. Speaking during Sunday’s protest before plainclothes police officers recording the event with video cameras, Vahap Saman gave an impassioned speech about his difficulties since being dismissed in April 2018 from his position as a health worker at Istanbul’s Fatih Sultan Mehmet Hospital.

Saman said he had contemplated suicide before he found a support group of dismissed civil servants who refer to themselves as “decree law victims” and come from different ethnic and political backgrounds.

“We are neither accepted as citizens of this country, nor are we allowed to seek asylum,” Saman told Al-Monitor. “We are being killed in silence.”

The Turkish Ministry of Justice did not respond to requests for comment for this article.

In recent months, Turkish news reports have increasingly addressed the financial obstacles faced by dismissed civil servants, some of whom have been denied access to pensions and social security as well as routine banking and financial services. Purged workers are legally not allowed to work or start new businesses.

Some have been barred from state health care benefits, such as Bayram Erzurumluoglu, a former associate professor at Adiyaman University, who was diagnosed with multiple sclerosis a year before being laid off in September 2016. Erzurumluoglu said he moved in with his sons after emptying his savings and selling his home and belongings to pay for prescriptions and private health insurance.

“Of course, the purge has negatively affected my health,” Erzurumluoglu told Al-Monitor. “If my children were not supporting me, I could have died from this illness.”

Responding to domestic and international pressure, the Turkish government has established a special state of emergency commission to review the dismissal decisions. A 2018 report by Amnesty International found the commission to be “unfit” due a lack of institutional independence, prolonged waiting periods, the absence of safeguards for those refuting the allegations against them and “weak evidence cited in decisions upholding dismissals.”

Andrew Gardner, a senior Turkey researcher for Amnesty International, said the commission has created a lengthy appeals process involving multiple court proceedings in which the government’s initial decisions are often rubber stamped, if the cases are accepted at all. Gardener said the commission’s appeals process essentially serves as a delay mechanism, stalling defendants who may seek to take their cases to the European Court of Human Rights.

“If the [commission’s] aim was to deliver justice, then obviously it’s been a monumental failure,” Gardner told Al-Monitor.

He added, “It was a politically motivated purge which was arbitrary — which was not based on evidence, at least not any evidence that was made available. This is the same situation, more than three years later. Obviously, for people who aren’t able to carry on with their professions, aren’t able to leave the country, the longer this situation continues, the harsher the punishment is.”

Omer Faruk Gergerlioglu, a member of parliament with the pro-Kurdish People’s Democratic Party (HDP), echoed these sentiments, claiming the commission was unconstitutional, as its lengthy procedures could extend purge-related appeals processes for years. He added that according to his calculations, the commission has only accepted 9% of applications and rejected about 77%.

“The commission should be dissolved,” Gergerlioglu told Al-Monitor, adding that workers with no evidence against them should get their jobs back. “Everything is a mess right now. … Those who are actually guilty of the coup should be punished, of course, but thousands of civil servants and their families cannot find work, even in the private sector.”

In the meantime, dismissed professors fear their legal troubles are dissuading current and future academics from working in Turkey. Tuna Altinel, a math professor at the Claude Bernard University Lyon 1, is under travel restriction after spending several months in jail during a visit to Turkey last year. He said discussions of a brain drain have increased on university campuses amid the crackdown on dissidents.

“Turkey is experiencing, as far as I can understand, the biggest brain drain that ever happened in this country,” Altinel told Al-Monitor. “There have been other periods of oppression in Turkey, such as in the post-1980 coup period, but even then, the brain drain was not so large in size. It is my personal feeling that people are going abroad not to come back.”

Simsek Rathke agreed, adding that she only knows a handful of academics who were reinstated to their former positions. She said a small number of Academics for Peace had withdrawn their signatures from the 2016 declaration and got their jobs back, but others pursued legal action and returned to their positions without withdrawing their signatures.

“We don’t know how it works because it is not transparent,” Simsek Rathke said. “Nothing is transparent. That’s the problem in this country.”