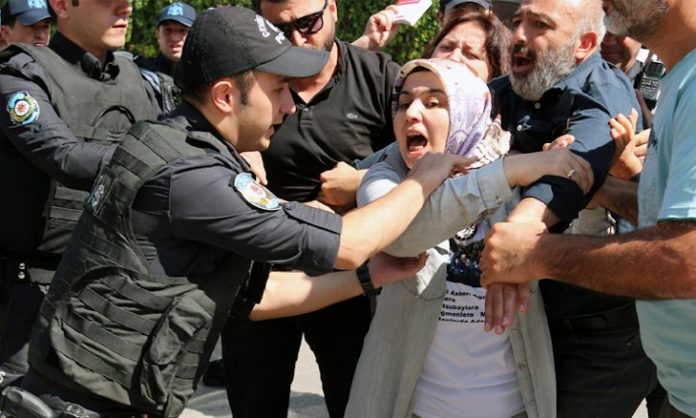 For the past couple of months, a woman has protested the plight of military students who were sentenced to life imprisonments over the failed coup attempt of 2016.

On Jan. 19, Melek Çetinkaya began a “Justice March” to save her then-19-year-old son Furkan and more than 300 other military students from imprisonment after she lost hope that justice would be served in courts.

The failed coup of July 15, 2016 saw thousands of soldiers gather on the streets and the bombing of state institutions by putschists – widely believed to be followers of the U.S.-based Islamic preacher Fethullah Gülen, an ally-turned-foe of the ruling Justice and Development Party (AKP).

Shortly after became clear that a coup attempt was underway, President Recep Tayyip Erdoğan urged people to go out on the streets to stop the putschists. As a result, millions of people across Turkey poured onto the streets to resist the coup-plotting soldiers.

That night also saw the death of over 250 people. Military students were ordered to leave army barracks and go out to the streets. Dozens of them were lynched by crowds and arrested regardless of their lack of knowledge that they were participating in a coup attempt.

Furkan Çetinkaya, a cadet at the Turkish Air Force Academy, was in a training camp in the northwestern province of Yalova when his commanders told him a terrorist attack was unfolding and they needed to head to the academy for their safety.

Melek Çetinkaya said that the students had no idea what they were taking part in and that no one attempted to stop them when they were leaving the camp.

Çetinkaya also said that the students paid for the toll charge whilst crossing the Osmangazi Bridge on their way to Istanbul.

“Would the students not violate the law on highways and not pay for the toll charge if they knew they were heading to Istanbul to take part in a coup?” she said.

While the students headed to five different directions in nine buses, the group that included Çetinkaya’s son found out about the attempted takeover when they were in Istanbul’s Sultanbeyli district.

“As soon as they learned about the coup attempt from the people on the streets, they got out of the bus and sang the national anthem right away. Doesn’t this prove that they were against the coup?” she said, adding that the people in the area praised the students for denouncing the coup bid.

“The people hung Turkish flags on their necks and were thankful that they weren’t coup-plotters,” she also said.

Because of these public’s display of love towards the students, Çetinkaya thought that her son and the others would be released shortly.

“How else could they have resisted the coup? There aren’t any casualties, but displays of love for the soldiers in the area that my son was in,” she said.

Things didn’t turn out as Çetinkaya expected, however. The indictment into the military students getting prepared a year after they were arrested.

“The indictment doesn’t include any accusations,” she said.

The first hearing of the case was held four months after the indictment was prepared and the sentences were issued in the fourth hearing, six months after the first one, with the court ruling for life in prison over “attempting to abolish the constitutional order.”

“This is a political ruling and not a legal one. In order for this crime to take place, the students should’ve left the barracks on purpose and staged an act. They had no idea what they were involved in,” Çetinkaya said, adding that she was surprised about the conviction.

“What does a 19-year-old military student have to do with the coup?”

Çetinkaya lost hope in justice when the appeals court approved their sentences, pushing her to search for ways to make her voice heard some three years after her son was arrested.

“During my routine prison visits to my son in Silivri on a Friday, I thought, ‘Why shouldn’t I walk this way to make our children’s voices be heard instead of taking the bus?’” she said.

She then announced that she would start a “Justice March” on Jan. 19 from Ankara’s Güvenpark.

“There were hundreds of police officers in the park to prevent people from gathering to support me. They asked the people if they were there to participate in my march and detained them if they said ‘yes.’ I was also detained,” Çetinkaya said, adding that she was beaten and handcuffed.

Police detained 66 people on Jan. 19, which included the mothers of 25 military students.

“We could have reached over 600 people if police didn’t prevent us from gathering,” Çetinkaya said.

Ömer Faruk Gergerlioğlu, a deputy from the Peoples’ Democratic Party (HDP) who has been following Çetinkaya’s struggle closely, was also at the park to support her.

“There was heavy police presence and they beat and detained people. The scenes that we witnessed were saddening for Turkey and a state of law,” Gergerlioğlu told Duvar English.

“In Turkey, the rule of law does not prevail, it’s a police state.”

Çetinkaya was also detained in the following three days, prompting her to end her march.

“They want to intimidate me, but they don’t know me. They will eventually understand that I won’t back down.”

Not all mothers support Çetinkaya’s actions.

“There are mothers who want to stay silent due to the fear that something might happen to their children in prison,” she said, adding that the majority backs her protests.

Turning to her son’s prison conditions, Çetinkaya said “the children are bored and suffer from psychological pressure.”

“They see being hospitalized as an advantage because they see different people there,” she said, adding that over 40 people are forced to stay in the cells suitable for seven people.

“Our children are being tortured,” she also said.

Çetinkaya described the first week that the students were imprisoned.

“They were tortured in their first week. In fact, I talked to a guard who worked as a prison guard in Silivri. He told me that they received orders to beat the children. The guard I talked to was one of those who beat them. I told him to never show his face to me again,” she said.

Çetinkaya believes her son will be released one day.

“The case is in the Court of Cassation’s hands. I know that this conviction will be overturned, but I don’t know for how long we will wait. We’ll be waiting patiently,” she said, while clarifying that the waiting process will include peaceful protests.

“Our acts don’t include bombs, knives, stones or any other violent tool. I once distributed carnations to the people to draw attention to the plight of the military students,” she added.

According to Çetinkaya, the issue is being discussed within the AKP.

“There are AKP members who say, ‘Your children are innocent, but there’s nothing we can do about it,’” she said.

Gergerlioğlu said that she will feature in history books as a significant female resister.

“She told me, ‘I didn’t know what politics, resistance or the streets meant, but this state taught all of them to me,’” Gergerlioğlu said, as he urged people to support Çetinkaya’s struggle.

“The sentences given to the students are very cruel and those mothers were left alone,” he said.

Turkey declared a state of emergency that lasted for two years following the failed coup attempt – a period that was marred by human rights abuses and arbitrary sentences.

According to Gergerlioğlu, the imprisoned military students are amongst this period’s most disadvantaged.

“When we look at the environment created by the state of emergency, we see that these students are the most disadvantaged because they were sentenced to life imprisonment though they were very young. We need to look into their case,” Gergerlioğlu said.

“The government is constantly defaming them and no one wants to do anything to support them,” he added.

The deputy noted that all of the imprisoned students are successful and smart, adding that they were prevented from accessing their books in prison.

‘These children are scapegoats’

Both Çetinkaya and Gergerlioğlu think that the issue is not being discussed enough.

“The people are either avoiding the subject over the fear of being branded as a Gülenist or they brand those children as Gülenists. The society needs to defend them more. There is a decision that’s not fair. These children were picked as scapegoats,” Gergerlioğlu said.

“There is a part of the society that is unfortunately not aware of anything. They’ve been watching insensibly and apathetically,” he also said, adding that the government is afraid of the enlargement of any opposition movement.

“That’s why they detain and beat these mothers. They want to deter people,” he said.

Çetinkaya said that while her outreach in social media is high, the press is short of covering it.

“It’s because of this empire of fear,” she said.